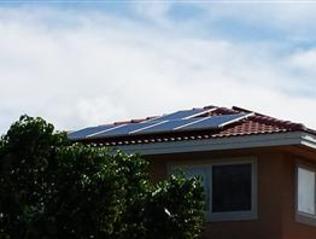 1959
Hoffman Electronics achieved 10% efficient, commercially available PV cells and demonstrated the use of a grid contact to significantly reduce series resistance. Explorer-6 was launched with a PV array of 9600 cells, each only 1 cm x 2 cm.

Most people are surprised to learn that solar photovoltaic technology has a history of over 170 yrs. The first scientific breakthrough was in 1839 by nineteen-year-old French physicist Alexandre Edmond Becquerel who observed a physical phenomenon allowing light-electricity conversion. At that time King Kamehameha III was still in power. In 1958, Nasa launched Vangaurd 1 as its first solar powered orbital satellite, which was over 50 years ago. That was one year before Hawaii’s statehood.

The panels that are on your neighbor’s homes are a product of a long history of scientific breakthroughs. It’s the technology of energy conversion and also the technology for saving you money.

PV has been around long enough to be a trusted technology, and PV Tech is your trusted company.

1923
Albert Einstein received the Nobel Prize for his theories explaining the photoelectric effect.

1951
A grown p-n junction enabled the production of a single-crystal cell of germanium.

1954
The PV effect in Cd was reported; primary work was performed by Rappaport, Loferski and Jenny at RCA. Bell Labs researchers Pearson, Chapin, and Fuller reported their discovery of 4.5% efficient silicon solar cells; this was raised to 6% only a few months later (by a work team including Mort Prince). Chapin, Fuller, Pearson (AT&T) submitted their results to the Journal of Applied Physics. AT&T demonstrated solar cells in Murray Hill, New Jersey, then at the National Academy of Science Meeting in Washington, DC.

A HISTORY OF SOLAR PHOTOVOLTAIC ENERGY

1839
Nineteen-year-old Edmund Becquerel, a French experimental physicist, discovered the photovoltaic effect while experimenting with an electrolytic cell made up of two metal electrodes.

1876
Adams and Day observed the photovoltaic effect in solid selenium.

1904
Hallwachs discovered that a combination of copper and cuprous oxide was photosensitive. Einstein published his paper on the photoelectric effect.

1914
The existence of a barrier layer in PV devices was reported.